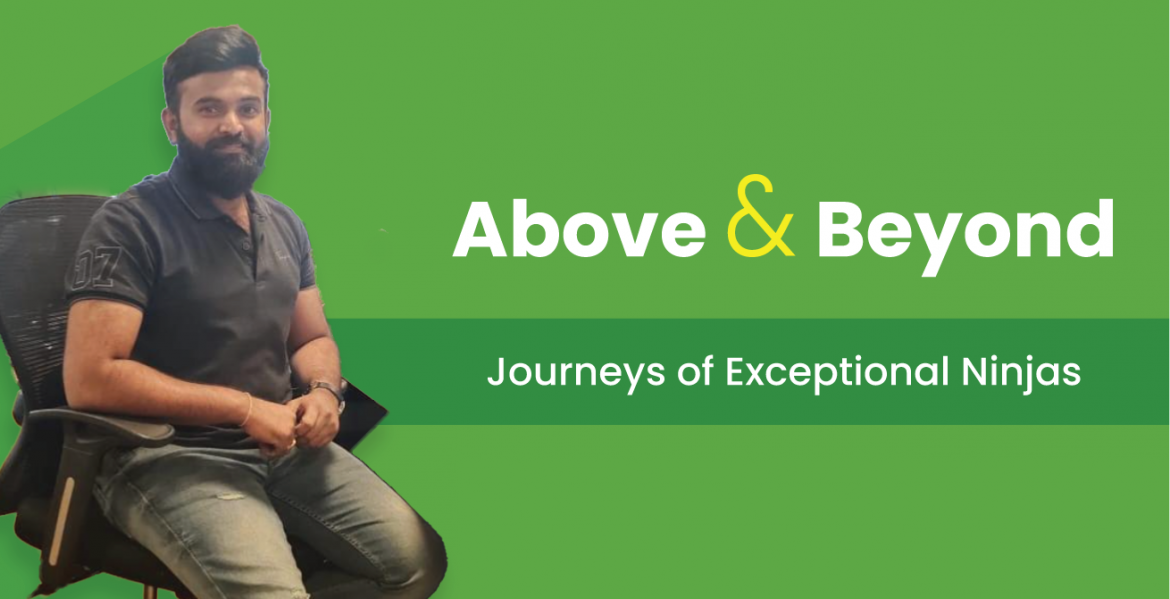 “I joined Ninjacart at the time when I had just shut down my IT business in the year 2019. Professionally and personally, I was going through a very vulnerable time. After trying hard to figure out many things, I landed at Ninjacart in February 2019. By far, it has been an amazing experience in my professional journey. I grew, succeeded, and failed, but one thing that never stopped was learning.”

From the beginning of my journey as an IT Executive to reaching the position of an Assistant Manager, Ninjacart has nourished me with everything that I could ask for, starting from great mentors to the greatest learnings. As the first person in its newly set-up  IT team, during the course of 2019, we started building it and there were a lot of experiments in terms of how we worked and the processes we followed. I was an Executive back then and worked on multiple aspects like creating a proper asset management system, installation of CCTVs, and managing all of it on a pan-India level. With this, I even managed the end-to-end IT-related issues in DCs and FCs. During this time I got a complete insight into how the business functioned, which gave me a lot of clarity about how I needed to advance with my job.

“My managers Mariyan, Noopur, and Mohammed have been my biggest strengths. They were there in every phase of my growing stint and supported me in every possible way they could. Together we made the IT space of Ninjacart more systematic and viable. With the change in time, it has completely taken a new turn in terms of how it looked like three years back and how it looks now.”

Then in the year 2020, when I got my first promotion to become a Senior Executive. I was quite excited as there were a lot of things that came to my plate. Along with working on what I did previously, in this phase, I was liable to handle the IT management in all the 500+ MDCs across India. During this time I had a team of around 5-6 people, who operated pan India to set up the IT management. This was a big challenge, as there was a lot to do, but with a limited workforce. But I was glad the way we pulled it off and managed an end-to-end set-up for all the 500+ MDCs. It was quite a major achievement. This phase came in with learnings in a space where I was able to understand team and stakeholder management to a greater extent.

“With time, I have grown up in terms of how I have functioned as an “IT guy”. Ninjacart has given me the freedom and the space to keep going no matter what I could do or what I would do in the future. Starting from acknowledging my strength and forgiving my failures to giving me an open ground to learn, experiment succeed, and, fail, the organization nourished me with everything that I could ever wish for.”

In 2021, I received another promotion, as the Team Lead for the IT department, based on my performance. Along with everything else I handled, in this phase of my stint, I consciously made it a point to bring in the aspect of setting higher standards of professionalism, something that we missed previously. We also introduced an asset management tool, which helped us track the IT inventory in a much better way. As a result, we were able to solve a big problem of asset loss, prevalent at that time.  Alongside, we also started the IT ticketing tool, in which we gained around 99% efficiency. I kept on acquiring a lot of experiences that went ahead to enrich my learning at all levels.

This year, I got promoted to Assistant  Manager for the IT Team. I intend to maintain the ingrained efficiency and professionalism that the team has grown to know and love with this new stint and designation. Alongside, our major focus is on creating strong IT security policies with stronger data security protocols for the entire organization.